Technically, the category was vidya on the CTF, but this is a RE problem

This challenge gives you a Gameboy ROM and the description tells you that you need to beat the level in order to get the flag.

So I get to the end of the level and the evil challenge writer thinks its funny to make the last platform non solid.

Based on the challenge description, it looks like I just need to move my character to the end of the level, so I started looking for the character’s X coordinate in the game.

VBA is really awesome. It lets you look right into memory of the game and automatically update it as the game runs. I was able to find the where the I/O states are stored and watch the player’s coordinates change as I moved around. Unfortunately, when I tried to set the values to something else, they snapped back to their original values. This is probably because the memory here is constantly being updated from the emulated hardware’s I/O. What I really need to find is the location in memory the player’s state is being saved so I can change it directly. 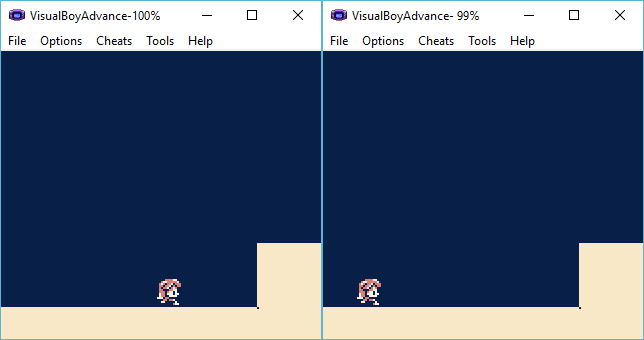 In order to find where my player state is, I dumped memory in each state seen above with VBA. I should expect to find that the memory storing the player’s state, more specifically the player’s X value is going to be different between the two memory dumps and most other things should be the same.

The first two differences I saw where at the start of where RAM is mapped to (0xC0000). The first change, circled in red, is the same values I saw in the I/O section; I tried to change them and the same behavior happened. The next difference, circled in green is what I found to be the player’s X and Y coordinate as 16bit integers.

We know where the player’s state is located, so lets just change it!