I wasn’t able to spend too much time on this CTF, however I did manage to get first blood on the highest valued pwn with Antibuddies solving the challenge only 1 minute after me.

It turns out that the guy that wrote the backdoor in NSTFTP wasn’t a great C programmer either, and we think his code has bugs. Can you prove it by exploiting the server and running flag_printer? We’ll need that flag to prove it’s vulnerable. (Note, binary and libc are both available over NSTFTP.)

We were only provided a PCAP and no binaries, so we had to figure out how to retrieve the binaries before we can begin vuln research.

Opening the PCAP in wireshark, I inspected the TCP streams to see how to interact with the NSTFTP service.

The client sends a request to read the “README.txt” file and the server responds with the contents.

This is all the information we need to be able to read the contents of the nstftp binary as well as the flag_printer binary.

Using that info, I created a small script to pull the nstftp, flag_printer, and libc-2.31.so binaries.

An example of that code for the libc-2.31.so binary below.

The first binary I pulled was the flag_printer binary. The main function of that binary calls get_flag, which reads the flag from /root/pwnflag.

So from here it seems like the way to go is to run this binary or just read the flag file.

I moved onto reversing the nstftp binary to understand more of this protocol. 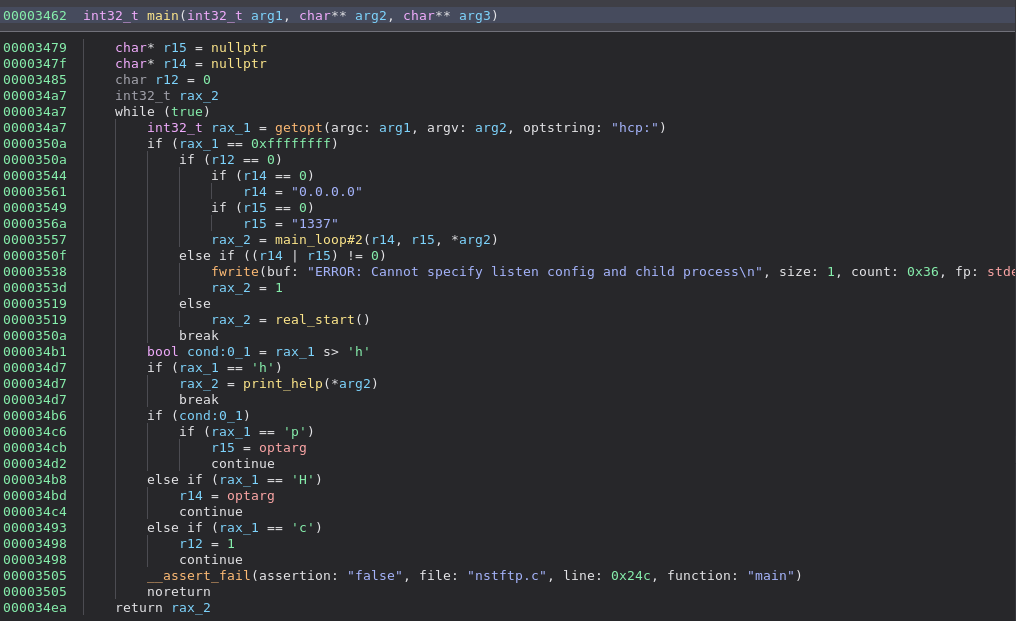 real_start sends the server version packet and then calls a function which then parses the user’s sent packets. 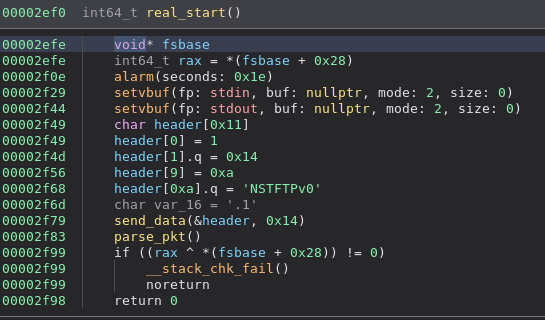 The parse_pkt then parses the packet and determines what function is run. 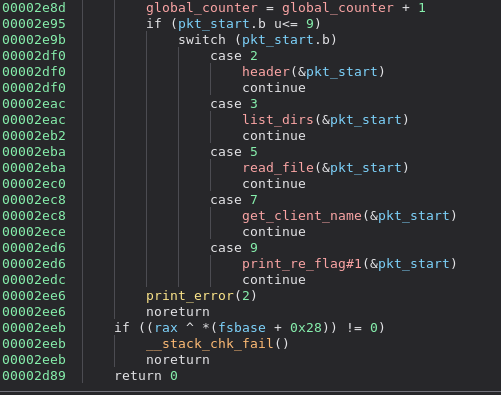 At this point, I have determined the packet structure to look something like

By sending a specified opcode, we can control which function will be executed with our packet.

With the goal being to read the flag file at /root/pwnflag, I looked into the read_file function. Unfortunately, as shown below, the read function will error out of we try to send a file name containing a /. 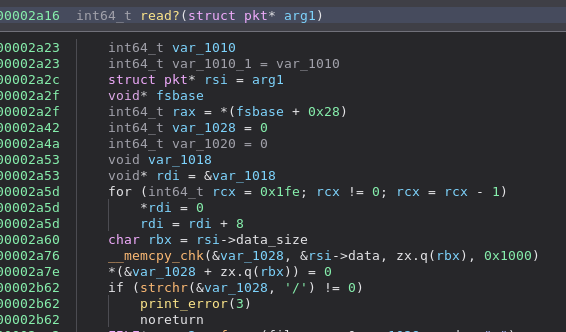 The print_re_flag#1 is for a different challenge so I won’t go into detail about that one.

I then looked at the list_dirs function. There was an interesting part of code which contained the vulnerability.

I put a break point on the address below to stop gdb right before executing my corrupt function pointer.

To set my breakpoint, I used the following gdb-gef commands:

When gdb breaks, I run continue to run past the first packet and then break right before we trigger the corrupt function pointer. 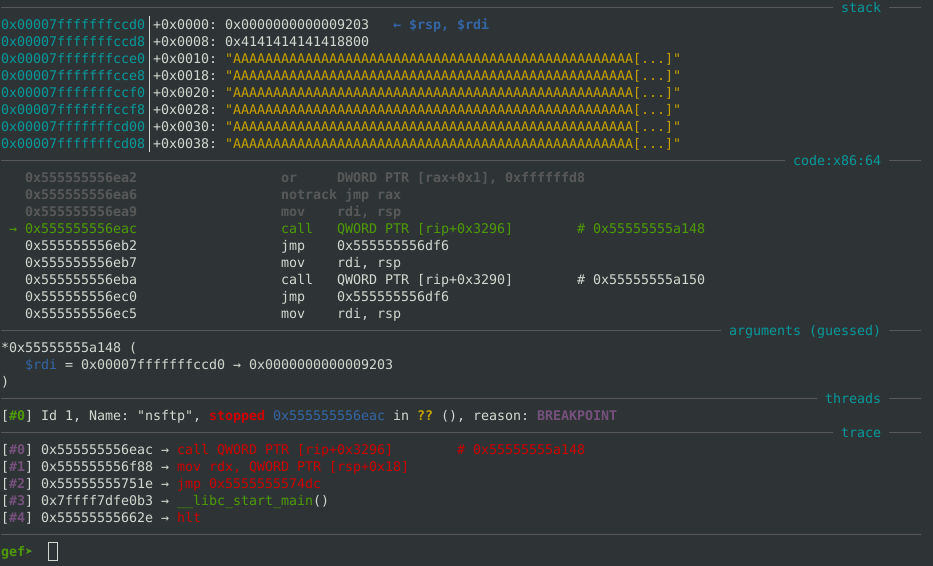 If I step passed this next instruction, the binary will call what is at 0x55555555a148 using tele we can confirm we overwrite the function pointer with 8 “B”s.

Getting the right enviornment

To make sure that my local exploitation lines up with the remote service, I used pwninit to retrieve the correct interpreter and then used patchelf to set the binary’s interpreter and rpath.

I also renamed the libc we retrieved from the service to libc.so.6.

Now that we have a crash we can control, we need to pop a shell, unfortunately this binary has all mitigations enabled as well as ASLR on remote.

With PIE enabled, ROPing becomes a lot harder as we can not use any gadgets in the base binary without knowing the the address the binary is loaded at. With ASLR enabled, the same goes with libc gadgets. So its important that we can find a leak of either libc or the base binary.

Going back to the functions we can run, the list_dirs function was able to print all the files in a given directory and unlike the read_file function, there was filter on the path.

This means we can leak the files in the directory /proc/self/map_files. Inside this directory contains links to each file mapped in the binary NAMED the address start hypen end of the mapped region. This is very similar to the output of gdb’s vmmap

So know we can send a packet to list the directory of /proc/self/map_files and leak both the binary base address and libc base address.

First by sending a packet to read /proc/self/map_files and then parsing that response we can then write a gadget correctly mapped over the list_dir function pointer.

The best type of gadget to go with is a one_gadget so we don’t need to write any complicated ropchain.

Running one_gadget on the libc results in 3 gadgets:

Setting that breakpoint before the function pointer call like I did earlier, I examined the state of the registers at the time right before our control of the program counter.

Both r12 and rdx are NULL so it appears the second gadget will work.

Unfortunately, after stepping through that one gadget, execution breaks at the following instruction: 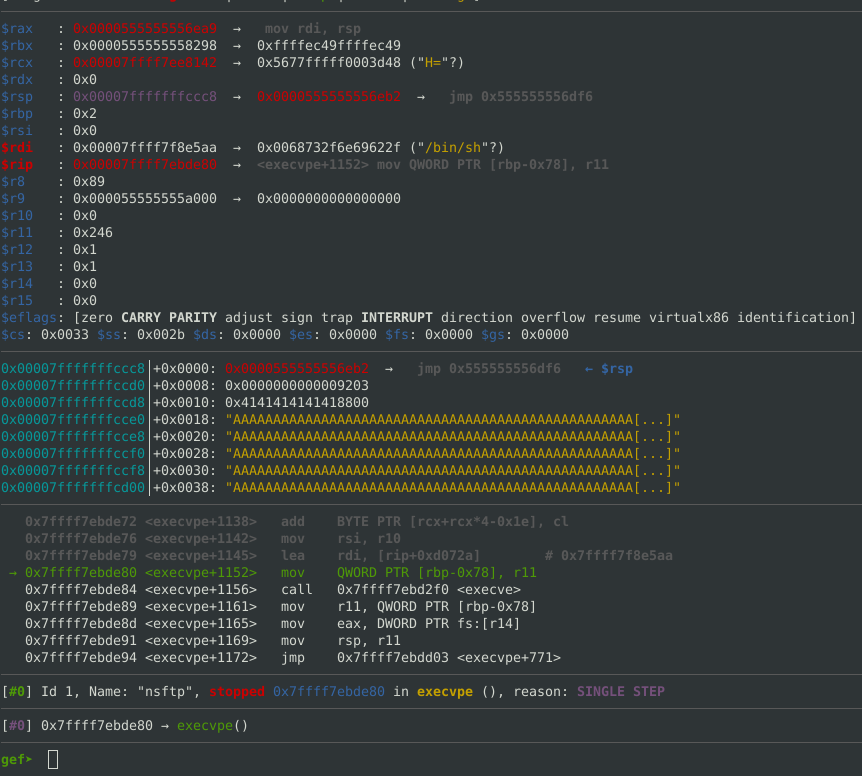 This gadget requires rbp to be a valid pointer so we can’t use this gadget.

So like always, one_gadget fails, I have to turn to finding a useful gadget manually.

Opening the libc up in binaryninja and looking at all the references to the string /bin/sh, I found a gadget to loads the string into rdi and sets rsi from r15.

rdx is alread NULL at the time so we have everything we need.

Using the gadget at 0xe6c81, we finally pop a shell

We can the run the flag_printer binary and get the flag

NOTE: there was so problem with pwntools reading the socket stream so instead of just running io.read(208) I had to run a loop to read 1 byte at a time 208 times.